Delay in Treatment of Fetal Distress

Dr. Larry Veltman and Darrell Ranum explore the patient safety issues and risk factors surrounding obstetrical claims. Dr. Veltman, a board certified ob/gyn who practiced in Portland, Oregon, for more than 30 years, has served on the board of the National Perinatal Information Center/Quality Analytic Services since 2010 and is a member of the Board of Directors of the American Society for Healthcare Risk Management (ASHRM). He is past chair of the Committee on Professional Liability for the American College of Obstetricians and Gynecologists (ACOG) and currently serves on ACOG’s Patient Safety and Quality Improvement Committee and on The Doctors Company Obstetrics Advisory Board.

In 2012, The Doctors Company conducted a study of claims and lawsuits involving neonatal injuries occurring in labor and delivery. The purpose of the study was to identify issues associated with the allegation “delay in treatment of fetal distress.” It was hoped that the results of that study would lead to a decrease in these types of injuries.

In April 2019, we conducted a second study using the same methodology to determine if changes had occurred in the practice patterns affecting the types of injuries suffered by neonates in labor and delivery. We identified some positive changes.

The final diagnoses for neonatal patients in this category include the following:

The claims review revealed the following reasons for delay in treatment of fetal distress (FIGURE 1):*

*Note: The categories were determined from review of expert opinions regarding the care in each case. More than one category might apply to a given case.

Several differences were noted between the two studies. Two categories for delay in treatment did not show improvement as a percentage of these cases. In the first category, nurses failed to identify FHR tracings (usually Category II and III) as predictive of metabolic acidemia in a higher percentage of cases in the 2019 study (17 percent versus 11 percent in 2012). In the second category, nurses who recognized FHR tracings as predictive of metabolic acidemia failed to timely notify the attending physician in the same percentage of cases (20 percent in 2019 and 20 percent in 2012). This may indicate the need for more frequent training of nurses on interpretation of FHR tracings and physician notification.

Improvement was noted as a smaller percentage of claims resulting from physician failure to go to the hospital to assess patients when requested by nurses (third category). Anecdotal evidence seems to indicate that the growth of supportive cultures in hospitals in which physicians train with nurses and engage in effective communication may be influencing this category. A second reason why this group of allegations may have decreased is the growth of the obstetric (OB) hospitalist movement—which means that a physician is always on the perinatal unit and able to respond to emergencies.1

A significant shift was noted in the fourth category, “Physicians aware of concerning FHR tracings did not make timely decisions to do cesarean sections.” This category of delay in treatment decreased from 43 percent in the 2012 study to 29 percent in the 2019 study. Our interpretation is that physicians and nursing teams are better prepared to respond to crisis situations and don’t hesitate to take appropriate action. The widespread implementation of drills and simulation training is an important component of obstetrical safety, especially for obstetrical emergencies. This may have also contributed to the decrease in claims.

In the fifth category, physicians appeared to have developed exit strategies, such as preparing for cesarean sections, when attempting operative vaginal deliveries (OVD) with Category II and III FHR tracings. The percentage of cases in which physicians used other interventions (forceps or vacuum) to facilitate delivery when Category II or III tracings were identified dropped from 20 percent in the 2012 study to 5 percent in 2019 study.

In the sixth category, there were fewer instances of operating rooms or staff not being available (2 percent in 2019 versus 6 percent in 2012). We believe that this is a function of planning ahead and developing exit strategies, such as cesarean sections, before attempting OVD.

In the 2019 study, there were no examples of disagreement in interpretation of FHR tracings (there were 2 percent in 2012) between nurses and physicians (the seventh category). We don’t know if disagreements were not documented or if training together reduced the potential for different interpretations.

The most dramatic shift was in the eighth category, “patient injury was due to undetermined causes.” The 2012 study showed 20 percent of cases in this category. The 2019 study revealed that experts were unable to identify a clear cause of neonatal harm in 45 percent of cases. This indicates that a smaller percentage of neonatal injury claims were due to what the experts identified as substandard care.

Studying these cases, we have identified multiple factors that may contribute to an adverse outcome and a subsequent allegation of delay in treatment of fetal distress. Several emerging themes point to risk mitigation strategies that might help in avoiding neonatal injuries.

These themes include the ability to identify FHR patterns that are predictive of metabolic acidemia, the importance of effective communications between physicians and nurses, the ability to perform a rapid cesarean delivery, the timing and safety of operative vaginal delivery, and monitoring the newborn after operative delivery. The following provides a more comprehensive description of the risk mitigation strategies associated with these themes:

As shown in Figure 1, our studies revealed recurring themes in cases with adverse outcomes alleging delays in treatment of fetal distress.

Addressing these themes proactively and in real time should become a strategic activity for physicians and nurses who staff obstetrics departments. Increased readiness for and recognition and management of complications, improved communications, and required technical skills should all work in concert to reduce the likelihood of these difficult and tragic outcomes. 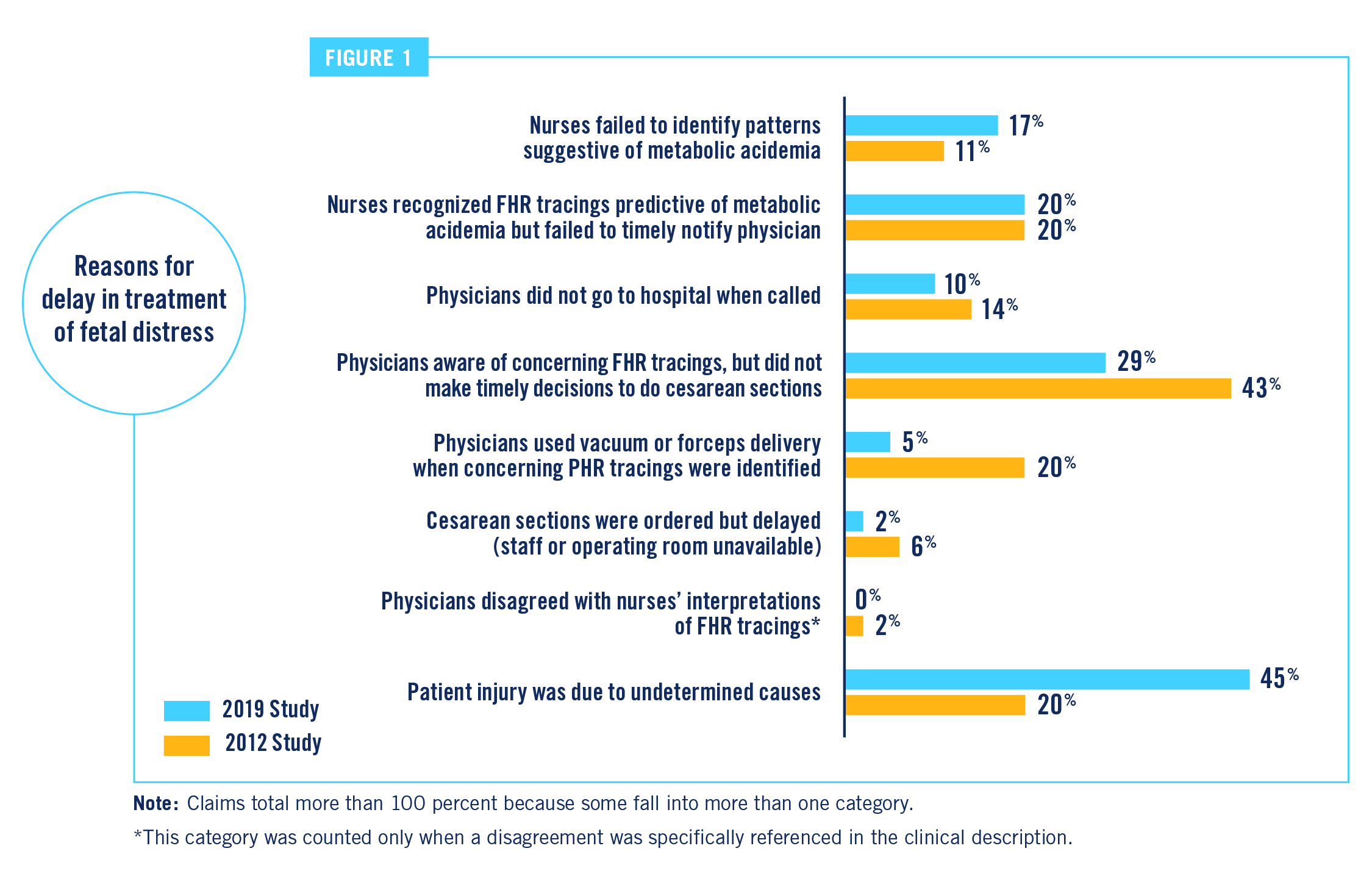 The guidelines suggested here are not rules, do not constitute legal advice, and do not ensure a successful outcome. The ultimate decision regarding the appropriateness of any treatment must be made by each healthcare provider considering the circumstances of the individual situation and in accordance with the laws of the jurisdiction in which the care is rendered.