About The Doctors Company

The Case for Legal Reform
Chapter 15 of Medical Malpractice: A Physician’s Sourcebook
The rising cost of claims has fueled a dramatic rise in the cost of medical malpractice insurance in the United States. Legal reform is an issue of great significance to both doctors and healthcare consumers, since insurance costs have forced many physicians to curtail their practices, move to other venues, or even retire from the practice of medicine. This chapter reviews the nature and extent of the problem, the relevant attributes of medical malpractice insurance, and the evidence that legal reforms can ameliorate the problem.
(November 30, 2007)

Introduction
Medical Malpractice: A Physician’s Sourcebook
A panel of physicians, attorneys, academics, researchers, and insurance industry experts consider questions about the origin, nature, and ramifications of the medical malpractice litigation crisis, as well as possible solutions and alternatives to the current system.
(November 28, 2004)

Medical Crisis Is Sweeping the Nation
Wyoming Tribune Eagle, September 12, 2003
In the mid-1970s, the story in California was much the same as it is today in a number of states spiraling into crisis. Today, California faces significant health challenges to healthcare delivery but the cost of protection for malpractice liability is not one of them. MICRA’s reforms brought sense and stability to the system in California, just as they can do in other states.
(September 12, 2003)

Malpractice Reform that Has Worked
San Diego Union-Tribune March 11, 2003
California led the way in malpractice liability reform more than a quarter century ago, and it’s a success story that can be imitated by other states.
(March 11, 2003)

Delayed Diagnosis of Cancer
Physicians must maintain a high index of suspicion of cancer and exclude diagnosis with certainty to minimize risk of missed or delayed diagnosis.
(June 1, 2000)

Chairman’s Letter to JAMA Editor
Dr. Anderson confirms that Dr. McDonald and colleagues provide an important critique of the IOM report on medical errors and of the Harvard Medical Practice Study (MPS) that is integral to it.
Letter to the editor of JAMA written by Dr. Richard E. Anderson, chairman of The Doctors Company Board of Governors, praising the critique of the IOM report on medical errors in the JAMA article by Clement J. McDonald, MD, et al., “Deaths Due to Medical Errors Are Exaggerated in IOM Report"
(January 1, 2000)

Reducing Delays in Diagnosing Lung Cancer
Lung cancer is common in both men and women, and its presenting manifestations are protean. Delayed diagnosis occurs when a recognized sign or symptom receives inadequate evaluation or when x-ray findings are missed or not thoroughly tracked.
(January 1, 1999)

Physicians Will Be Drawn into Lawsuits against HMOs
Between Rounds
Panel statement: Physician anger against managed care is such that organized medicine is supporting efforts to remove the ERISA preemption. This anger is understandable—but the strategy will end up injuring us and the practice of medicine to a greater extent than it will HMOs and the managed care industry.
(December 1, 1998)

The High Costs of Defensive Medicine
San Diego Union-Tribune, June 14, 1998
“Defensive medicine” is an increasingly common practice that should concern every American woman—the growing tendency of doctors to order needless tests to establish a medical record for their defense in case they are sued.
(June 14, 1998)

Harvard Study Continues to Distort Health Care Quality Debate
Harvard Medical Practice Study
The Harvard Medical Practice Study is often cited in discussions of healthcare quality and medical malpractice reform. Missing from this discussion is any mention of the critical flaws of the study, which not only render the data of virtually no use for public policy debate, but which also fail to support the authors’ conclusions about the medical-legal system.
(January 1, 1998)

An “Epidemic” of Medical Malpractice? A Commentary on the Harvard Medical Practice Study
The Manhattan Institute’s Civil Justice Memo
Medical malpractice litigation is one of the largest components of the tort system.
(July 1, 1996)

What Doctors Need to Know About Malpractice 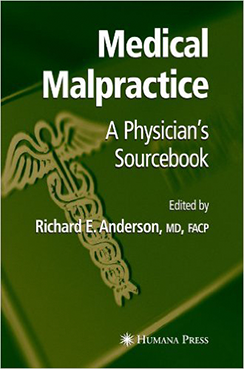 This authoritative and wide-ranging book gets to the heart of issues facing physicians and surgeons today. Chapters by Dr. Anderson on the insurance industry, breast cancer litigation, and legal reform measures, combined with important sections written by The Doctors Company’s medical director and board member, David B. Troxel, MD, and former board members Mark Gorney, MD, FACS (1924–2014), and Ann S. Lofsky, MD (1956–2008), make this book an essential medical-legal resource.

Medical Malpractice: A Physician’s Sourcebook is now available in paperback and Kindle editions.