The Doctor’s Advocate | First Quarter 2020
An Ounce of Prevention

Only 26 percent of medical oncology claims resulted in a payment to the patient or family members. Half of the payments for alleged negligence were less than $100,000 (see FIGURE 1). However, the potential for large indemnity awards exists: Three claims exceeded $1 million (13 percent of paid claims). 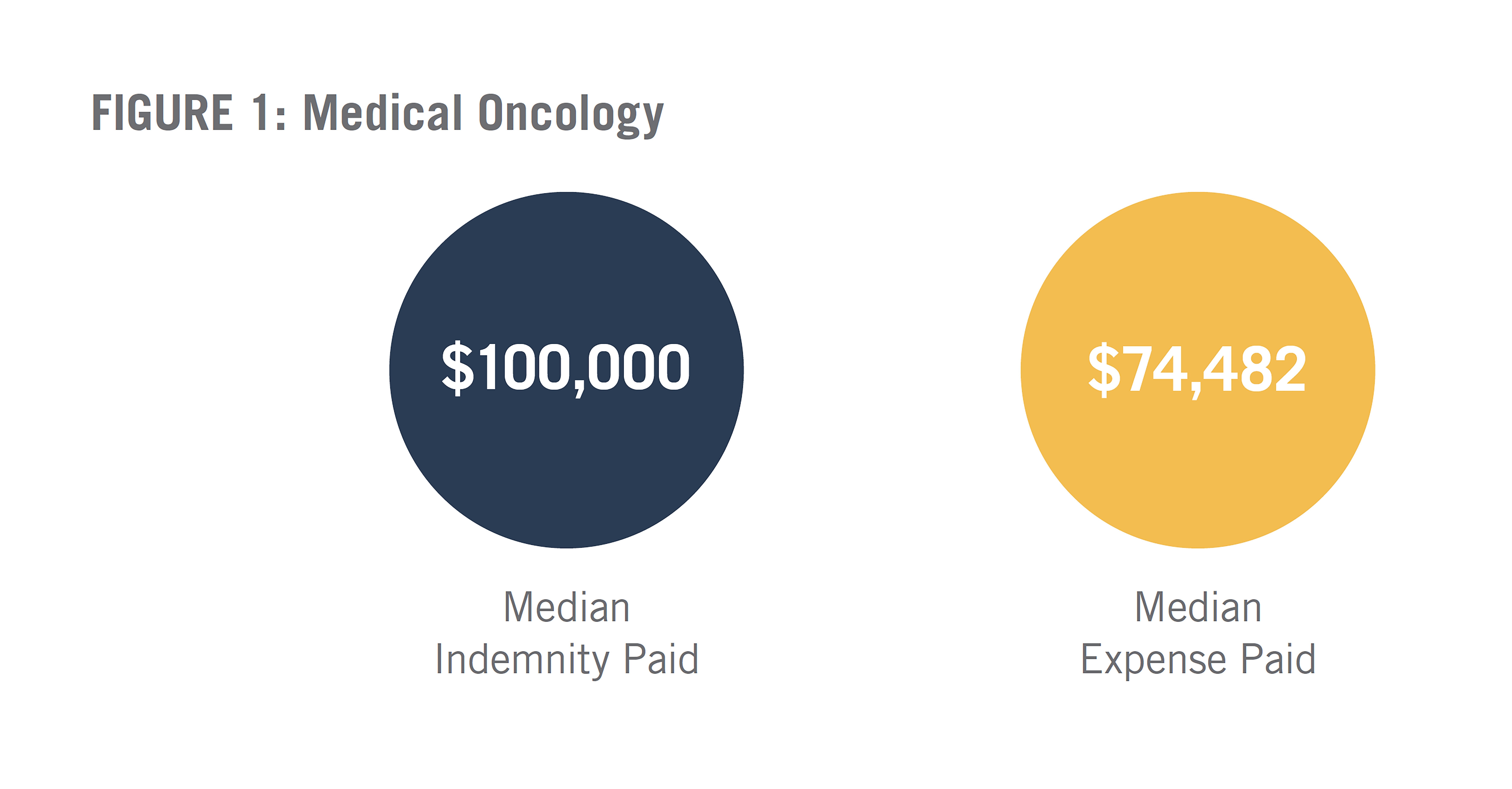 We found three primary drivers in medical oncology claims. They were related to (1) diagnosis (failure or delay) (29 percent), (2) management of treatment (29 percent), and (3) medication management (13 percent).

The factors that contributed to patient injury in diagnosis-related claims included inadequate patient assessments (46 percent), communication among providers regarding the patient’s condition (23 percent), and communication between the patient (or family members) and providers (21 percent). In 15 percent of cases with a diagnosis-related allegation, we found a failure to report findings (or revised findings) to the correct clinician in a timely manner that would have enabled the oncologist to act on the information.

Improper management of treatment (29 percent) tied with diagnosis-related claims as the most common driver of medical oncology claims. Physician reviewers found inappropriate selection of treatment, including failure to order medications and ordering medications that were contraindicated or were not the most appropriate for the patient’s condition.

In one case, for example, the patient’s white blood count was very low, but she was still given the next chemotherapy dose. Her white blood count dropped even lower, and she began experiencing intense weakness with fever and chills. She was admitted to the hospital but expired before medications or a blood transfusion could be started.

Some experts opined that the next dose should not have been given. Others said that the patient would have experienced a poor outcome regardless of the interventions.

In another case, two numbers for the chemotherapy order were transposed, increasing the dose fivefold. The patient received the excessive dose for five days before the error was discovered, resulting in hearing loss, neuropathy, and kidney damage.

Inadequate communication between the patient or family and the provider was another factor that affected the oncologist’s ability to manage patient treatment. In some cases, patients failed to report important clinical information. In others, physicians did not provide adequate information about the risks of medications or inform patients about other treatment options. Tensions also arose between physicians and patients when the physician’s response was not viewed by the patient as sympathetic, thus widening the communication gap. In a few cases, language barriers made communication difficult.

One case involved a patient on chemotherapy who began having low-grade fevers. Her physician ordered a complete blood count (CBC), but the patient did not have the test performed. No follow-up discussion about the CBC or its importance took place.

At subsequent office visits for chemotherapy injections, the patient’s vital signs were not checked (or not documented). The patient’s family recorded her body temperatures during treatment, but it appears that the elevated temperatures she experienced were not reported to her physician.

The patient presented to the emergency department in septic shock and subsequently died. Although this claim against the physician was unsuccessful, it demonstrates how failure to share information between the patient or family and providers can harm the patient.

In other communication cases, patients refused to continue with treatment. Documentation was limited or nonexistent regarding physicians’ conversations with patients about the consequences of refusing treatment or other options for the patient to consider.

The third driver of medical oncology claims was inadequate medication management (13 percent). Most of the drugs associated with oncology claims were chemotherapy and immunosuppressants. We also found cases in which anticoagulants were not managed properly, resulting in hemorrhages and brain damage or loss of an appendage.

In one case, the physician was aware of the heparin-induced thrombocytopenia but failed to timely change to an appropriate anticoagulant. This resulted in below-the-knee amputations.

In another case, a patient with lung and metastatic brain cancer was treated with chemotherapy and radiation. The patient received a conservative dose of radiation. However, the patient expired suddenly from a suspected brain hemorrhage.

Medical errors can be devastating to oncology patients, who are often very ill and fragile. The following strategies can help physicians reduce some of the risks revealed in this analysis:

An Ounce of Prevention
Analysis of Medical Oncology Claims