Napa, California—August 27, 2019—As provider adoption of electronic health records (EHRs) approaches near-universal levels, a study from The Doctors Company shows the frequency of claims in which EHRs contributed to injury continues to rise.

Analyzing EHR-related medical malpractice claims that closed between 2010 and 2018, The Doctors Company uncovered that the pace of these claims tripled, growing from a mere seven cases in 2010 to an average of 22.5 cases per year in 2017 and 2018. 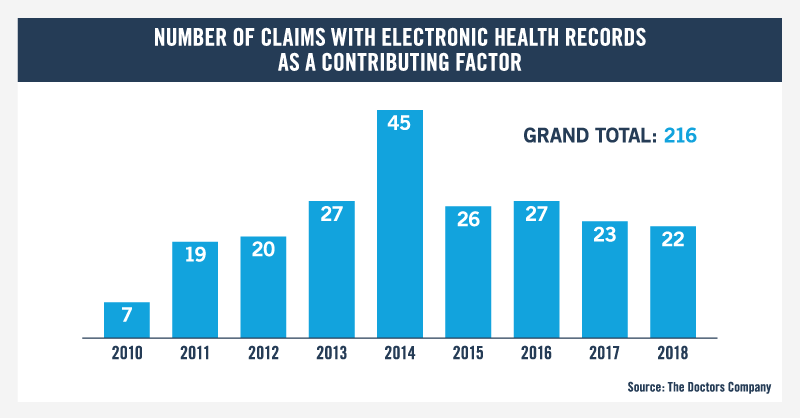 While EHRs are not often the primary cause of claims, the study shines a light on potential risks they may pose in care delivery, as well as the top factors that contributed to the claims. The study showed that EHR-related claims were caused by either system technology and design issues or by user-related issues. Among the top findings:

Based on this data, study author Darrell Ranum, JD, CPHRM, vice president of patient safety and risk management at The Doctors Company, identified the following steps to prevent EHR-related risks that may ultimately contribute to an adverse event:

“The Doctors Company began analyzing the impact of EHRs on medical malpractice claims as early as 2010, being one of the first insurers to look into this important issue,” said Ranum. “What we have discovered is that allegations of injuries where EHRs are a factor, while a small percentage of overall claims, continue to be a concern as the potential for harm can be catastrophic. Practices should have processes in place to monitor EHR issues and prioritize the need for EHR improvements and redesign based on risk.”

Stay in the Know

Our e-newsletter features timely articles, videos, and guides on a range of patient safety topics.